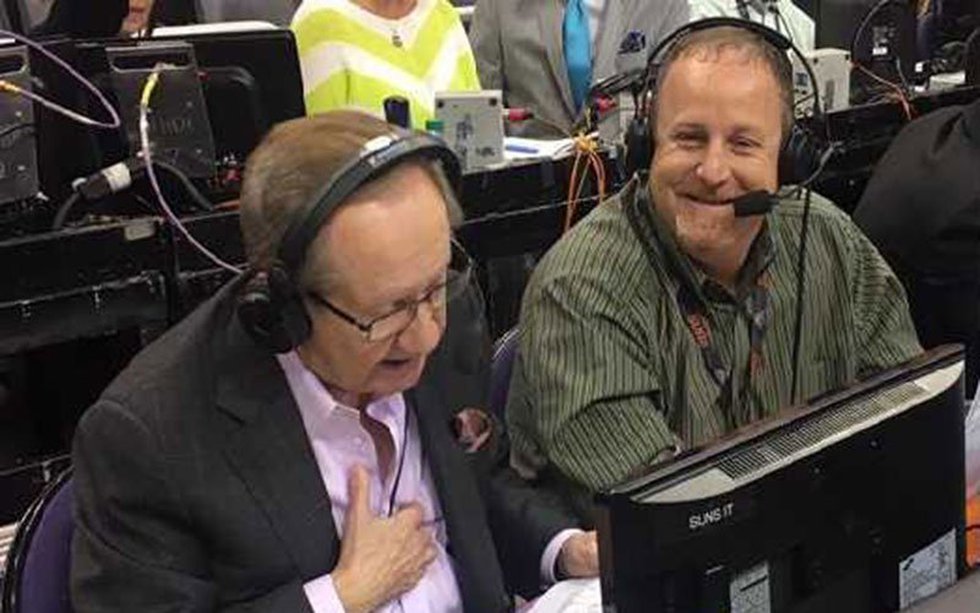 PHOENIX – NBA players and coaches have said the playoffs are a different type of game than the regular season. Pressure. The hype. The excitement. Many young Phoenix Suns players experience it for the first time as they continue to play in the Western Conference Finals.

But there’s also another group that feels similar pressure, hype and excitement: the broadcasters.

Al McCoy has been broadcasting Suns basketball games for almost 50 years. Countless Arizonans have grown up hearing his “Shazam!” call after a successful shot. McCoy, 88, has made several playoffs and is thrilled with the team’s return.

Suns fans know this. Eleven years have passed since the team last played in the playoffs. In the 2009-10 season, the Suns advanced to the Western Conference Finals but were ousted by the Los Angeles Lakers. This year, they beat LeBron James and the Lakers in the first round in six games and swept the Denver Nuggets in four.

Want to pay less for a Suns playoff ticket? Go to Los Angeles

Jon Bloom has been a Suns broadcaster for 14 years and believes this year’s squad is bringing a new generation of fans.

â€œI’m starting to see this through the eyes of my kids,â€ Bloom said. â€œYou know, 10 years ago, 11 years ago when the Suns were last in the playoffs, I basically had a baby and a toddler. And now they’re at an age, almost both teenagers, where they can really understand why daddy is a freak of the wild for this basketball team.

Broadcasting playoff games is exciting and brings people together, but with all the coronavirus pandemic that has brought, calling games on the radio isn’t quite the same thing. Typically, broadcasters attend court proceedings. They could see and hear everything that was happening on the pitch, on each team’s bench and in the crowd.

Today, broadcasters watch TV screens in conference rooms rather than from the arena, but they are still responsible for helping listeners view the game.

“We’re trying to paint the picture,” said Bloom, who is a jack-of-all-trades and helps with game, pre-game, half-time and post-game programming for the show. Suns radio.

â€œOn television, it’s different. â€¦ Advertisers, when they describe the action, most of the time they’re just having a conversation because they know you have the images, â€he said. â€œBut when you call a radio audience it’s a whole other job, or I like to call it an art form. And in some cases, it gives the impression that a painter is being told to paint the portrait without a brush. It’s quite tricky when you don’t have all the images and yet you take it upon yourself to describe them.

Juan Urresti, 29, is more recent on Suns radio. This is his first year as a color analyst for the Spanish show on La Mejor 106.5 FM and 1400 AM in Phoenix. He works alongside Arturo Ochoa, who has been delivering Suns play-by-play radio in Spanish since 2004.

â€œWhatever reason you can’t watch the game, you want to listen to the game. Feel like you are watching it and understand what is going on,â€ said Urresti. â€œI think it really is. our job, you know, on the radio, to imagine and build an image in people’s minds. “

The Suns’ playoff race brought many people together, including those from the Hispanic community. More than 40% of Phoenix’s population is Hispanic, according to 2020 census data.

â€œIt’s really great to be a part of this community,â€ said Urresti. â€œYou know, everyone’s come out of the rocks that they’ve probably been hiding for so many years that we haven’t been in (the) playoffsâ€¦ And you feel good when you see that, you see that the work is done and he helped the team and also the community to be a part of it.

When it comes to the pressure and nerves building up to call a playoff game, veterans McCoy and Bloom said they don’t feel it anymore. Urresti and Marco Peralta, 22, who hosts the pre-game, half-time and post-game show in Spanish for La Mejor 106.5 FM and 1400 AM, are both in their first years. on Suns radio.

â€œWhen I first arrived it was all nervous,â€ said Peralta. â€œBut the excitement of the opportunity to be on call and help a great organization like the Phoenix Suns is something very special. “

Copyright 2021 Cronkite News / Arizona Board of Regents. All rights reserved.